I never though it would happen, but we decided to get another kitty! Puff is getting old, and she doesn’t pay much attention to the chipmunks invading our property anymore. So we brought home Scamper, who, strangely enough, looks just like a cat we had many years ago named Blackie.

At first our dogs weren’t sure if we had brought them home another chipmunk to chase, or if that puny little ball of fluff was really going to be another pet. But after a few weeks they accepted Scamper as an acceptable life form, a little lower than the average dog. 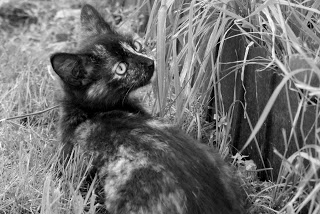 Here are some pictures I took today of them playing: