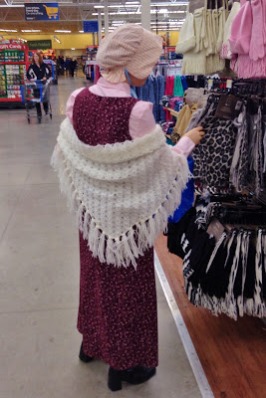 On Wednesday December 12th, I donned as close as I could find to 1800’s clothing (complete with ankle boots, shawl, and sunbonnet) and browsed up and down the aisles of Walmart.
Clothing is a very unconsciously important, unwritten social norm in our society today. People identify you by your clothing. For example, just the site of a white prayer cap and cape dress identifies a woman as a Mennonite. Black felt hats, overgrown beards, black capes and shawls and black bonnets spell Amish to anyone who sees them. Flowing silk skirts and long, full head coverings usually identify the Muslim women in a crowd. If someone is not part of one of these groups, the typical social norm is usually jeans, a tee-shirt, and tennis shoes. Professional people wear dress suits, and some wear stylish dresses, skirts, and high-heels. However, prairie dresses, shawls, ankle boots, and sunbonnets are a thing of the past, and to be dressed in this way really does go against the currents norms for clothing.
As I browsed around the store, “window shopping” and reading labels, I slyly watched people’s reactions to my clothing out of the corner of my eye. There were three reactions. The most common was for people to look me up and down, then immediately pretend to ignore me while catching occasional glances at my odd attire when they thought I wasn’t looking. I had expected this reaction, but I had not expected people to actually laugh at me! One woman coughed out a restrained laughed after she had passed me, and two young ladies actually laughed right to my face: “Oh my G**, really?” they laughed aloud, then began snickering and whispering to each other. In light of this reaction, it was very refreshing to have one older gentleman look me in the eye with a smile and a nod. I actually found it rather amusing when the man behind the checkout counter become extremely nervous at my peculiar-looking presence. He stared and his hands shook as he rung up my purchase! All in all, I cannot say that this was a fun experience. Quite the contrary, I felt very odd and out of place, causing me to withdraw into my shell instead of reaching out with smiles and nods like I often do. My strange appearance coupled with my apparent shyness then caused people to react to me the way they did.
Even though this experiment was far from fun, it was very eye-opening. I felt first-hand what people of religious groups such as Amish and Muslims must feel. The stares, ignoring, and laughs hurt—and the only thing that had changed about me was my clothing! Underneath I was still the same person who often walks through Walmart without feeling self-conscious! I did find it very interesting that my clothing did change the way I myself acted, however. Because I felt strange, I acted very reserved and withdrawn, which could have been one of the causes for people’s reactions to me. Truly, my eyes have been opened to how others feel who, usually for religious reasons, violate the social norm of dress. Underneath their clothes they are just regular people like you and me, and yet people shun them, stare at them, whisper behind their backs, laugh at them, and even take pictures of them. This treatment causes them to act withdrawn and shy instead of warm and friendly, which in turn increases people’s reactions to them.
This experiment came a little closer to home to me than it might have to others. You see, as a conservative Christian I have always tried to dress modestly in skirts and dresses—usually modern-day, however, minus the shawl and bonnet! Yet, as the world daily declines in morality, the “normal” dress becomes increasingly revealing and inappropriate. If we as Christians want to keep pure and modest, I think we will need to get more and more used to violating the social norm of dress (not with 1800’s clothing though) in order to follow Godly standards!