Speaking of challenge, this assignment was one of the most challenging that I ever completed! I don’t even know how many hours I put into each of these folder games. But, all the effort paid off–I received a grade of 100%!

What are folder games? A learning game made out of a file folder for easy storage, where the folder is the game board, and game pieces and instructions are kept on the covers. For this class (Instructional Practices for Math Teachers), I was supposed to create two math-related folder games that were based on two different state math standards. This post gives the instructions for creating the first math game.

Standard of Learning
MN Math Standard 4.1.1.5 (Grade 4): “Solve multi-step real-world and mathematical problems requiring the use of addition, subtraction and multiplication of multi-digit whole numbers. Use various strategies, including the relationship between operations, the use of technology, and the context of the problem to assess the reasonableness of results” (Minnesota K-12 Academic Standards in Mathematics,” 2007).

Directions for Playing
The objective of this game is to be the quickest at creating an equation that will come as close as possible to a given solution. First, the players must lay out all the egg game pieces, turned face-down. Each player will choose 8 game pieces. Next, each player will pick one more number from the down-facing eggs. The number each one picks will be the given solution he must try to solve for. At the word Go, each player will begin to arrange the 8 random numbers he chose into the equation in such a way as to come as close as possible to his given solution. They may rearrange their egg game pieces within the equation and calculate as many times as they need to, using a calculator and/or scratch paper. When they are satisfied that they have arranged their numbers in the equation in the way that will equal a number as close as possible to their given solution, they will call “Done.” The other player must stop rearranging his equation. The player whose equation came the closest to their given solution WINS! For example, if player 1 is solving for 24 and creates an equation that = 32, while player 2 is solving for 16 and his equation = 40, then player 1 wins because 32 is closer to 24 than 40 is to 16. They should check each other’s math. If a student wants to play by himself, he can race against a timer or an hourglass. Players must work quickly, but carefully.

Directions for Creating the Game

Step 1: The Henhouse Game Board
Use Window’s Paint program to draw 8 (4 on top of 4) egg nests in a henhouse. Insert the chicken coop Paint drawing into a Microsoft Word document. Make sure it fills the whole page (no white margins). Set the picture to display underneath any text you add. Add the equation symbols for addition, multiplication (parentheses), and subtraction. Put an = ____ at the bottom center of the page, under the empty chicken nests. Print out two 8.5 x 11 copies of your chicken-house scene on glossy, borderless paper (use higher quality than print paper). Trim the two game boards to size, so that there will be a border from the edges of the folder around each sheet. Glue the two chicken-house game board sheets on the inside of the folder, one of the left side, and one of the right, facing outward in opposite directions, so that one child can play the game from one side and another child from the other side. Laminate the inside of the folder.

Step 2: The Egg Game Pieces
On a separate Paint file, create the egg template which will be used for all game pieces.  Insert your egg painting into another Word document 24 times. Make sure each egg is not too big to fit in the nest on the game board your created. Number the eggs from 1-24. Print out two copies of your egg game pieces, so that you have two copies of each number. Cut out your egg game pieces. Save one egg out (any number) that you do not laminate. Laminate all the other eggs on both sides. You should have 48 eggs, and two sets of the numbers 1-24.

Step 3: The Folder Back
Copy another of your egg paintings into Word. This time make it very big. You will put the instructions on it. You can just write them out on top of the egg picture, but, if you want, you can have the text wrap around the egg so it looked like the egg has some dimension (this is a more involved process, but looks great!). Print out and cut out the big egg with instructions on it and glue on either the left side of the folder’s back, leaving the right side of the folder back for the game pieces bag. Laminate the back of the folder. Find a small, plastic Ziploc bag to put the game pieces in. Use double-sided tape on a small space on the back of the Ziploc bag to secure to the right of the instructions egg.

Step 4: The Folder Front
Take one egg from your game pieces and a piece of trimmed off henhouse game board (a portion of the board walls of the henhouse). Write Chicken Egg Challenge on this strip of “wood.” Glue it to the center of the folder front. On the left side of this nametag, glue the one eggs that you did not laminate previously. Laminate the front of the folder. Write the name of the game on another discarded strip of trimmed off game board. Glue this to the tab in the top of the folder. 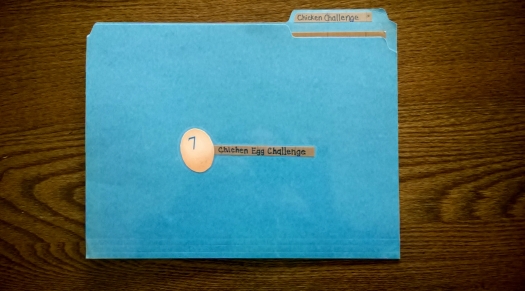