Here is the second folder game that I created for my Instructional Practices for Math Teachers class. You can view the first came, Chicken Egg Challenge, here. By the way, this folder game project took so much time, I can’t imagine how I would ever do anything like this once I actually have a classroom with papers to grade and daily lessons to plan (not to mention the meetings, communications with parents, and professional development)!

Directions for Playing
Mr. Geometurle is a puzzle game. The player must try to fit all the loose triangles inside the turtle’s shell. He must make sure the darker green edges on each triangle match the edges of the bigger shapes inside the octagon. He should see if he can find any patterns in the way that the angles of the triangles fit together to make other shapes. The angles written on the loose triangles, as well as the circles and angles drawn where certain shapes meet will give the student clues for where to place the puzzle pieces.

Directions for Creating the Game

Step 1: The Turtle
Use a compass to draw a circle that will fit inside your folder on dark green cardstock. Draw another circle with a diameter about ½ inch smaller inside the first circle. Use a protractor to draw 8 lines through the center of the circle at equal distances from each other (all of the lines will have 22 ½ degrees between them). Using the lines for references, draw an equally proportioned octagon on the perimeter of the second, smaller circle. Using a razor blade, carefully cut out the octagon and save it for later. Glue the remaining dark green circle with the missing octagon in the center to a lighter green cardstock circle of the same size. This is the turtle’s body. Cut out the shape of a turtle head and 3 turtle feet (the 4th is out of sight) out of the light green cardstock. Draw on shading, texture, and features with a dark green marker. Glue to the turtle body.

Step 2: The Puzzle
Inside the light green octagon of the turtle’s body, use your dark green marker to draw geometric shapes that fit inside the proportions of the octagon. I used a parallelogram, 2 triangles, 2 rectangles, and a trapezoid. Use a red pen to label each of the shapes and to, with the compass, draw little circles at the points where each of the shapes meet, labeling the angles of within those circles. Then, cut the octagon that you removed from the dark green cardstock into the exact same geometric shapes that you drew on the turtle’s body. Out of the light green cardstock, cut the same shapes, only slightly smaller, so that when you glue them to the dark green shapes, the dark green cardstock will show around the edges of the light green cardstock. Cut these loose shapes into triangles, no more than three triangles out of each shape. With the red pen, label each of these triangles as “Acute triangle,” “Right triangle,” or “Isosceles triangle.” Also label the angles in each of the corners of the triangles, using the compass to again make circles where the triangles meet to form 180 degrees or more. Laminate all your loose triangles on both sides. 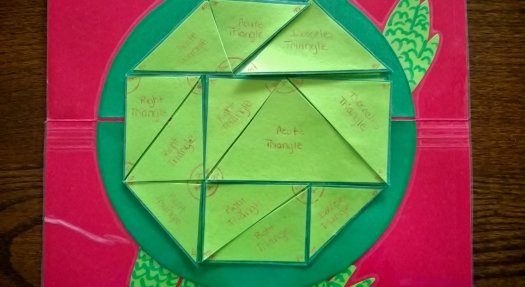 Step 3: The Folder Inside
Cut the turtle in half through the middle of the shell. Lay the turtle with its halves matching in the folder, the top half on one side and the bottom half on the other side. Leave a tiny space between the halves right along the crease in the folder, so that it can be shut without difficulty. When the halves of the turtle are lined up precisely, laminate the inside of the folder.

Step 4: The Folder Front and Back
On the light green cardstock, cut out a little label with the name of the game, Mr. Geometurtle, written in red pen next to a small turtle drawn in red pen. Outline the edge of the label in dark green marker and glue to the front of the folder. Make another label on light green cardstock with just the name of the game written in red pen and glue to the tab of the folder. Laminate the folder front. Write out the instructions for the puzzle in red pen on a square of light green cardstock, outline the square with dark green marker, and glue to back of folder. Laminate the back. With double-sided tape, attach a little plastic Ziploc bag next to the game instructions. Put the laminated puzzle pieces inside the bag and close. 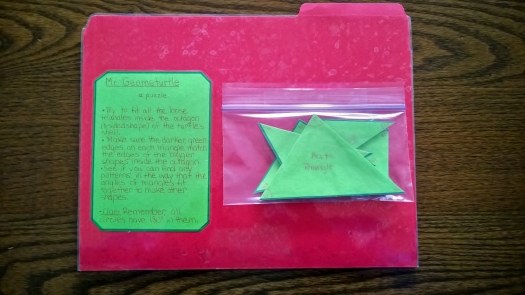