Skip to content
Yesterday I had to give a sermon at the prison for the inmates, since one of the regular speakers was gone (for those of you who don’t know, we are volunteers with MN Adventist Prison Ministry). Giving sermons up front is quite out of my comfort zone, but I am praising God that He took my nerves away, and enabled me to give a powerful message that touched the hearts of those who heard it. I thought you might enjoy reading a copy of it.

Today, I want to go over Chapter 1 of Galatians. Far too often we just skim over Scripture, without taking time to think about what it really means—internalizing it and studying each sentence in-depth until we can truly grasp it.

One thing that I’ve done and been blessed by—and that I’d encourage you to do—is to work your way verse by verse through a chapter of the Bible, taking one verse per day, no matter how simplistic that verse seems!

So, for example, Psalm 1:1: “Blessed is the man who walks not in the counsel of the ungodly, nor stands in the path of sinners, nor sits in the seat of the scornful….” It’s so easy to say, “Ok, sure, good advice,” and move on. But I would encourage you to make that your verse-of-the-day.

Ponder each word and phrase as you go throughout your day. Read over it again in your spare moments. Take it one word at a time and think about its deeper meaning and how it applies to you and your life. If you’re able to, write down some of the insights the Lord leads you to.

Earlier this year, I did this with Galatians chapter 1—going through it verse by verse, word by word—and I want to share some of the insights the Lord showed me. For the sake of time we can’t go through every verse, just the main highlights.

Galatians 1:1 – Paul, an apostle (not from men nor through man, but through Jesus Christ and God the Father who raised Him from the dead)

“Not from men nor through man….”

What does this mean? Why state it twice? From men… through man…. Don’t the two mean the same thing? When you take the time to think about it, there is a difference between the two!

In other words, Paul’s call to be an apostle was not from men—from any group of people, not the Jews, not the Pharisees, and certainly not the Christians (he was their worst enemy until his conversion). 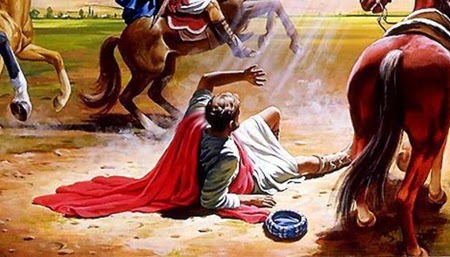 Not only that, Paul did not become an apostle through man—mankind—human effort, not through Paul’s own doing or through the doing of any other human being. This was a divine calling, from Jesus Christ Himself, and carried about only through divine power.

Verse 6 – I marvel that you are turning away so soon from Him who called you in the grace of Christ, to a different gospel, 7 which is not another; but there are some who trouble you and want to pervert the gospel of Christ. 8 But even if we, or an angel from heaven, preach any other gospel to you than what we have preached to you, let him be accursed. 9 As we have said before, so now I say again, if anyone preaches any other gospel to you than what you have received, let him be accursed.

Here Paul is stating his purpose for writing to the Galatian church. To understand the history behind this false gospel that the Galatians were turning away to, you have to read Acts 15:1-31, which I would encourage you to do on your own time.

Verse 10 – For do I now persuade men, or God? Or do I seek to please men? For if I still pleased men, I would not be a bondservant of Christ.

Stop for a moment and think about what Paul just said there. He points out he does not seek to please men.

He was not trying to win the approval of people; only God’s approval mattered to Him.

“If I still pleased men, I would not be a bondservant of Christ…” If pleasing people had been his goal, he would not have been Christ’s servant…. Let’s put our names in place of Paul’s: If pleasing others and gaining their approval is our goal, we are not servants of Christ!

How often do we seek for approval in the eyes of others rather than making pleasing Jesus our main concern? Jesus should be our focus—doing what will bring Him glory and honor.

So… that means we don’t have to worry any more about whether what we do or say hurts those around us, then, right? We’re not out to please people, so it won’t matter if we tell them exactly what we think of them and their opinions…. Right?

You’re not buying it…. I’m glad. I can assure you that putting Jesus first and seeking His approval only will never lead us to hurt others or trample on their needs or their feelings. The Lord would never approve of such behavior!

But, there may be times when we must follow Jesus at the expense of losing the friendship of others, losing their affirmation and approval. But if we are not ashamed to acknowledge our Lord and Savior before men, then He has promised that He will acknowledge us before the Father in heaven (Matthew 10:32).

Verse 11 – But I make known to you, brethren, that the gospel which was preached by me is not according to man. 12 For I neither received it from man, nor was I taught it, but it came through the revelation of Jesus Christ.

Paul did not receive the gospel message from any human source, and no one taught it to him. It came by direct revelation from Jesus Christ!

It is the same with spreading the gospel message today. While we are to do the work of bearing the message to others, we must never get the idea that by human effort we can give others the gospel, or that we can teach it to them.

No. The gospel can only come through direct revelation from Jesus Christ. He may use us in the process to lead someone by example or by teaching them from His word, but ultimately, He is the only one who can change their hearts and bring about the miracle of New Birth.

“Not from men, nor through man.”

God chose and called Paul by His marvelous grace even before he was born! Might He have called and chosen you and me for some special purpose even before our birth?

Jeremiah 1:5 – Before I formed you in the womb I knew you; Before you were born I sanctified you; I ordained you a prophet to the nations.

But that was just Jeremiah, right? Let me ask you, how many of us did God form in our mother’s womb? Psalms tells us that He knit each and every person together in their mother’s womb, so we can also be sure that He has a plan for each one of our lives, just like He had for Jeremiah.

Verse 15 – When it pleased God… 16 to reveal His Son in me, that I might preach Him among the Gentiles, I did not immediately confer with flesh and blood, 17 nor did I go up to Jerusalem to those who were apostles before me; but I went to Arabia, and returned again to Damascus.

When Paul received the revelation of Jesus Christ, he did the opposite of what I would have done. He did not rush out to consult with any human being—not even with experienced apostles!

Instead, he went to the wilderness of Arabia to be alone with God and be taught by Him. That’s why he could claim that his message was of divine origin. “Not from men, nor through man.”

Moses also needed a wilderness experience—40 years in the land of Midian—before he could lead God’s people out of Egypt.

Some of us have or are going through “wilderness experiences” too. Times of aloneness… singleness… separation from the things or people we hold dear.

Verse 18 – Then after three years I went up to Jerusalem to see Peter, and remained with him fifteen days. 19 But I saw none of the other apostles except James, the Lord’s brother. 20 (Now concerning the things which I write to you, indeed, before God, I do not lie.)

Why does Paul keep reiterating the fact that he is telling the truth? Why does he even mention his “wilderness experience”? Why is he so careful to point out of the fact that it wasn’t until 3 years later that he got to know Peter and James?

Suddenly the whole point he is trying to make in this chapter comes to light.

He is saying, “Brethren, listen to me! I am telling you the truth! This gospel wasn’t revealed and taught to me by men—not even by the other apostles! God Himself taught me through Divine Revelation, through His written word and through the things He created” (Rom. 1:20).

We can know God for ourselves too! Through His word… through His creation.

Don’t ever ride on the back of another person’s faith! You parents or your friends or your pastor cannot be followers of Christ for you!

You must have your own personal relationship with Jesus! You must read the Bible for yourself, so God can teach you directly from its pages. And you must be directly connected to God through personal prayer each and every day.

Verse 21 – Afterward I went into the regions of Syria and Cilicia. 22 And I was unknown by face to the churches of Judea which were in Christ. 23 But they were hearing only, “He who formerly persecuted us now preaches the faith which he once tried to destroy.” 24 And they glorified God in me.

These verses are the most amazing ones in the whole chapter. Paul is talking about complete transformation!

The same divine grace and gospel that transformed Paul can transform you and me! And people will glorify God because of it.

But it won’t be “from men, or through man.” But only “through Jesus Christ and God the Father who raised Him from the dead.”