From Friday the 25th to Sunday the 27th, our whole family had the privilege of attending the Nature’s Retreat Camp Meeting up in Middle River, MN. If you haven’t gone, I would highly recommend it! Not only was it spiritually reviving, but it was also a wonderful time to relax and drink in the beauties of nature, apart from the cares of every day life.

This was our third year at this camp, and I have to say, I think this year was the best it’s ever been, although last year’s health classes by Danny Vierra (who runs Bella Vita Lifestyle Center) could easily make it a tie! The theme this year was Surviving and Thriving in Troubled Times, and there were two speakers: Tim Roosenberg from Islam & Christianity in Bible Prophecy and MN Pastor Joel Kratzke. There was also a testimony time on Saturday afternoon where praise reports and missionary reports were given along with intermittent special music.

I’ll talk more about what I took home from the meetings in a minute. First, I want to tell you about the awesome “living conditions” this camp offers! I call it “Pampered Camping!” We were in a tent, but we brought two queen sized mattresses, a cot, and the warmest and softest sleeping bags got somwhere. They are SO warm. I also brought my down comforter. We were quite comfortable and warm, despite the fact that the temperatures plummeted quite a low at night!

Not only that, the camp had a kitchen trailer open for use by the campers. For the most part at Middle River Camp Meeting everyone brings their own food. There are no meals provided by the camp. For lunch on Saturday and Sunday everyone comes together for a potluck, but on the other days we have to fend for ourselves. This is made much easier by the kitchen trailer. This trailer is set up as a kitchen and dining room. It has lots of counter space, two refrigerators to store your food in, cupboards, a sink to wash dishes in, and two stoves (believe me, on those cold mornings it was certainly nice to be able to heat up our milk)!!! This was pampered camping for sure!

But, “Man does not live by bread alone,” so now let’s move on to the spiritual lessons learned at Middle River camp meeting.

First, there was MN Pastor Joel Kratzke’s messages. These were mostly about true revival, and were very convicting (though not at all condemning). I won’t go into detail about all the messages, or we could be here all day (or 3 days for that matter). I’ll just tell you personal tidbits that I gleaned from my favorites messages.

In another message, Ps. Kratzke retold an Old Testament story in a new and very interesting way. He was talking about witnessing and spreading the gospel. There are two extreme versions of the gospel today. The first harps the message of God’s unconditional love, where all we need is love and grace and we don’t have to worry about sin. Past sins are all forgiven, present sins are covered by Christ’s robe of righteousness, and any future sins were forgiven at the cross (in other words, live any way you please). The other extreme is harps on the coming judgment where God will pour out his wrath on sinners. In order to avoid this coming judgment, Christians must exert all their willpower to get right with God and stay right with Him (as if it is even possible in our own strength).

Ps. Kratzke then retold the OT story of when David’s son Absolom was killed. There were two runners–Ahimaaz and the Cushite–who wanted to bring the news to King David (see 2 Sam. 18:19-32). If you go into this story, you will find something very interesting in the meaning of the Hebrew word that is translated as tidings, or news. When it is used in reference to Ahimaaz, it is a Hebrew word with the connotation of good news. When used in conjunction with the Cushite, it is a slightly different Hebrew word meaning the whole truth. Basically, Ahimaaz wanted to run and tell the king the good news that his enemies had been defeated in battle. Apparently, Ahimaaz had a reputation for always bringing good news (see vs. 27). Joab did not want Ahimaaz to run, seeing as the king’s son had been killed, which was anything but good news. He instead sent the Cushite to tell what he had seen. Ahimaaz pleaded to also run, and overtook the Cushite. When he got to the king, his first words were “All is well,” (vs. 28). He would only tell David the good news of the victory in battle, and actually lied about the welfare of Absolom. The Cushite then arrived, and his first words were, “Tidings,” or, if you look at the Hebrew word, “The whole truth.” He then proceeded to not only tell the king the good news of the victory, but was honest about the true fate of Absolom (vs. 31-32).

While many on every side are telling the world that “All is well,” we need to present to the people a balanced message–the truth about sin coupled with the Good News of Jesus. When we carry the good news only, we are sometimes constrained to lie to cover the full truth. Yes, sin and the coming judgment are hard messages to bear to the world, but that’s the only way to put God’s love and grace in true perspective.

As far as the Islam & Christianity messages by Tim Roosenberg goes, I will have to give you an extremely basic summary. I have to say, these meetings were enthralling! Not only that, they were understandable! Now, for me, actually understanding an explanation of Bible prophecy is very rare. Mr. Roosenberg’s explanations made sense, were consistent, and, most importantly, were in line with Scripture. 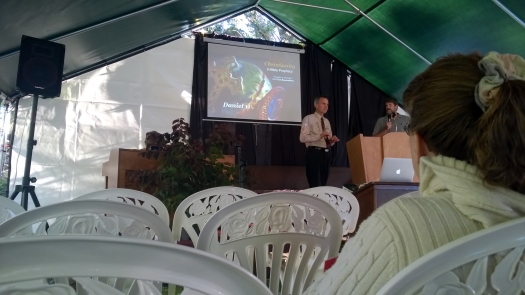 Ok, now for a summary. Mr. Roosenberg focuses mainly on the prophecy of the King of the North and the King of the South in Daniel 11. For years now there has been no satisfactory explanation of this prophecy, until the Lord led Mr. Roosenberg to study it out. The basic idea is that the King of the North is false Christianity, and the King of the South is Radical Islam, and God’s true people (including a remnant out of false Christianity and out of Islam) get caught in the middle. There is a lot of Scripture and history to back up this interpretation. Twice before in history false Christianity has fought against radical Islam and overthrown it (the Crusades & the Ottoman empire), and God’s true people have gotten caught in the middle of the fray. The book of Daniel predicts one more such battle and overthrow of Islam by false Christianity, which could be somewhere in the near future. When it happens, God’s true people will again be caught in the middle. However, that’s not the end of the story. For a short time after Islam is overthrown, false Christianity will appear to prosper, but then it will be overthrown by the final Kingdom–God’s eternal Kingdom! I wish I could go more in-depth, but there really isn’t room in this post, and Mr. Roosenberg can do a lot better job of explaining it than I can. Go to his website for more info, or consider buying his book. He also mentioned that you can listen to his seminars for free on YouTube.

Well, that’s that was what I gleaned from Middle River Camp Meeting! I’d encourage you to consider going next year!

Oh, and here’s what we had waiting for us when we got home!! Tons of green beans from the garden, and a large box of very ripe apricots! 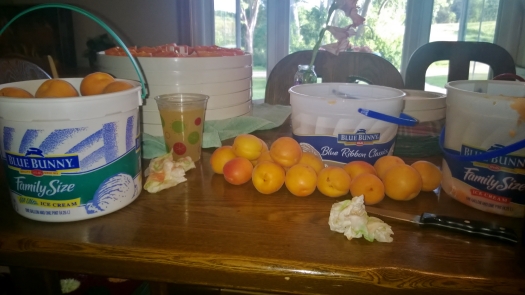 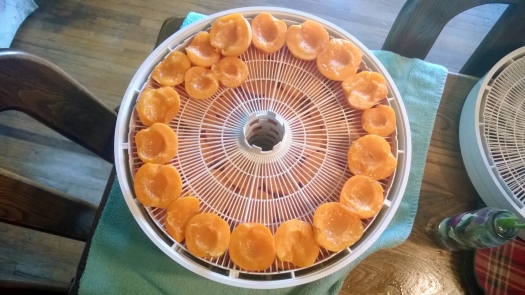 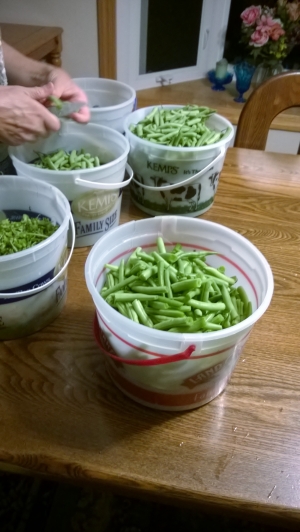